Aduhelm (generic name aducanumab) was approved by the Food and Drug Administration (FDA) as a treatment for all patients with Alzheimer’s disease on June 7, 2021. There was an immediate outcry, so on July 8, FDA specified that Aduhelm was only indicated for individuals with Mild Cognitive Impairment due to Alzheimer’s disease, since those were the only patients that had been studied in the Aduhelm clinical trials. Aduhelm was the first novel drug for Alzheimer’s to be approved since 2003.1

Aduhelm is a monoclonal antibody drug that is intended to delay cognitive impairment by removing amyloid plaque from the brain. Amyloid beta protein collects between neurons in the brain and is believed to be a biomarker of Alzheimer’s disease.2 However, in clinical trials of previous drugs, reduction in plaque was not found to predict meaningful improvement in memory or cognition.3

Participants in these trials were limited to those with mild cognitive impairment, which is considered the stage between cognitive decline typical of aging and the more serious decline typical of dementia. It is characterized by problems with memory, language, and judgment.6 Patients were screened for the studies using the Clinical Dementia Rating Global Score and the Mini-Mental Status Exam.4,5 A PET scan indicating the presence of amyloid plaque in the brain was also required to participate in either study.

The inclusion criteria for both trials excluded many patients: Adults younger than 50 or older than 85 years, and patients with any neurological condition other than Alzheimer’s disease that could cause cognitive impairment. Patients with heart disease, blood clots, kidney disease, impaired liver function, previous stroke, psychiatric illness in the last 6 months, relevant brain bleeding disorder or hemorrhage, alcohol or substance abuse in the last year, and patients taking blood thinners were also excluded. 4,5 Due to these criteria, 85% of Medicare beneficiaries with MCI were not represented.7

The treatment was administered by a monthly intravenous infusion for 18 months. The primary outcome measure in these studies was a Clinical Dementia Rating-Sum of Boxed score, which is used to measure the severity of Alzheimer’s dementia.8 Five clinical rating scales were also used as secondary outcome measures to investigate the full scope of Alzheimer’s symptoms including cognitive performance tests, clinical judgements, and caregiver input.4,5

Biogen reported that patients in study 302 had statistically significant less decline during the 18 months on measures of cognition and function such as memory, orientation, and language. Biogen also reported that patients showed less decline on activities of daily living, such as personal finances, performing household chores, and independently traveling out of the home.9 However, FDA statisticians disagreed with Biogen about the meaning of the results, as described below.

The FDA’s Peripheral and Central Nervous System Drugs Advisory Committee evaluated Aduhelm on November 6, 2020. NCHR President Diana Zuckerman agreed with the criticisms and concerns expressed by FDA scientists in her testimony during the public hearing portion of the meeting. Dr. Zuckerman warned, “We need to be concerned about the impact of approving this drug in terms of interfering with ongoing trials and future trials for any other promising Alzheimer drugs.” In the committee’s vote, 10 panelists voted that there was insufficient evidence to demonstrate that Aducanumab had slowed cognitive decline for Alzheimer’s disease and 1 voted “uncertain”. Approval was not recommended for the following reasons:

Despite the strong concerns of FDA scientists and the unanimous vote of the Advisory Committee, the FDA approved Aduhelm on June 7, 2021. It was approved “for the treatment of Alzheimer’s disease,” although most Alzheimer’s patients have traits that were excluded from the studies, including all patients with moderate or severe disease.

The drug was reviewed under the FDA’s accelerated approval pathway, which is used for drugs that fill an unmet health need and are based on surrogate endpoints. Since the Committee had agreed that the clinical trial data on memory and cognition did not prove the drug was effective, it was instead approved based on lower levels of amyloid plaque in the brain. Under this approval pathway, drug companies are required to conduct studies after approval to confirm the expected clinical benefit. FDA gave Biogen nine years to conduct a confirmatory study, during which the drug would remain on the market.

Aduhelm’s approval, the indication for all Alzheimer’s patients, and 9 years for a confirmatory study were met with immediate opposition from experts who pointed out that the drug was only tested in patients with mild cognitive impairment and that reduction of amyloid plaque was a much less important outcome than improvements in cognitive impairment. Three members of the FDA Advisory Committee resigned in protest.10 In the words of member Aaron Kesselheim, “This might be the worst approval decision that the FDA has made that I can remember.”10 NCHR sent a letter to the FDA leadership, co-signed with other scientific groups, criticizing the approval and the broad indication. A day later, Biogen submitted a revised label to the FDA, which stated the drug was approved only for Alzheimer’s patients with mild cognitive impairment. This change did not have much impact on the controversy, with questions raised about the FDA’s decision-making process.

A month later, the Acting FDA Commissioner, Dr. Janet Woodcock, requested an internal investigation into the relationship between FDA officials and Biogen leading up to the approval decision.11 As of April 22, 2022, both the Federal Trade Commission (FTC) and the Securities and Exchange Commission (SEC) have pending investigations into Biogen and Aduhelm approval, seeking marketing and approval documents from the company.12

Biogen initially listed the price tag for Aduhelm at $56,000 per person, per year. This did not include the additional costs associated with the drug treatment, such as brain scans to measure swelling and amyloid plaque. In November 2021, the Centers for Medicare and Medicaid Services (CMS), announced a 14% increase in Medicare Part B premiums for 2022. Approximately half of this increase was attributed to the need to generate revenue to pay for Aduhelm.13 The House Committee on Oversight and Reform investigated the drug’s approval and pricing.11 By December, Biogen announced a 50% price cut for Aduhelm, from $56,000 to $28,200; this would have no impact on the cost of brain scans.

As a result of the questionable evidence, Cigna and six affiliates of Blue Cross Blue Shield soon announced that they would not pay for the drug.15 Adam Myers, Senior Vice President of Blue Cross Blue Shield praised the decision, “Collecting and analyzing more data on Aduhelm will provide much needed insights into the drug’s safety and effectiveness.”16 Respected medical centers such as Cleveland Clinic and Mount Sinai announced they would not administer the drug.15 The two largest providers of Medicare Advantage plans, UnitedHealth Group and Humana, as well as insurers Anthem, Centene Corp., and CVS Health Corp did not publicly state their decision on coverage during those first months.15,17 As a result of the controversy, Aduhelm generated revenue of only $3 million for Biogen in 2021.14

When a new drug or device is approved by the FDA, CMS must make a coverage decision for that medical product. The decision is based on the medical product being “reasonable and necessary” for the diagnosis or treatment of a disease or illness.18 On January 11, 2022, CMS released a proposed National Coverage Determination for the coverage of Aduhelm, and monoclonal antibodies in the same class for the treatment of Alzheimer’s disease.19 CMS proposed restricting coverage of Aduhelm, and other Alzheimer’s drugs in the same class, only to patients enrolled in randomized controlled trials approved by the agency or NIH.

Among the other problems with the Biogen data, people of color were dramatically under-represented; fewer than 4% of the patients in the Aduhelm clinical trials were Black or Hispanic.6,7 This lack of diversity in the initial clinical trials has made it impossible to determine safety or efficacy for unrepresented populations. The CMS proposal addressed this problem by requiring that CMS-funded clinical trials must include a diversity of patients that represent the national population diagnosed with Alzheimer’s disease.

Many health insurance companies immediately praised the CMS plan.16 CMS provided a 30-day public comment period, and received approximately 10,000 comments. The comments of many healthcare organizations and experts agreed with the CMS decision, including NCHR’s public comment. Several patient advocacy groups with financial ties to Biogen, including the Alzheimer’s Association and the Alliance for Aging Research, vehemently objected. “Today’s draft decision by the Centers for Medicare & Medicaid Services (CMS) is shocking discrimination against everyone with Alzheimer’s disease,” stated a press release from the Alzheimer’s Association.20 Advocates for people with Down’s Syndrome objected to the fact that Medicare did not plan to include people with Down’s in the clinical trials; however, Biogen had already excluded them from their studies so there was no data available to indicate safety.

CMS finalized their coverage decision for Aduhelm on April 7, 2022. Aduhelm coverage will be limited to individuals participating in randomized controlled trials to confirm the efficacy and safety for the Medicare population.21 Medicare removed the requirement that the Aduhelm trials must occur in hospital-based outpatient facilities or exclude certain types of patients, instead specifying that the FDA will determine that the studies are appropriately designed and implemented to answer specific questions of safety and efficacy for designated populations.  In addition, the original decision was altered to specify that CMS will not necessarily impose the same restrictions on every new anti-amyloid therapy. If future treatments are approved by the FDA based on significant clinical benefits (instead of changes in a surrogate marker such as amyloid plaque), CMS will cover the cost of the drugs in post-market studies approved by CMS or NIH. UnitedHealthcare announced in early May 2022, that it will restrict Aduhelm insurance coverage to clinical trials across all of its health plans, stating that the drug is “not medically necessary for the treatment of Alzheimer’s disease due to insufficient evidence of efficacy.”22 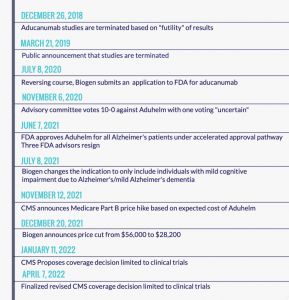