More medical device companies have been using an alternative pathway to get innovative products on the market faster, but a new user fee on industry could affect the use of this pathway.

The “de novo” classification pathway has been used to get devices on the U.S. market such as Accelerate Diagnostics Inc.’s PhenoTest BC Kit, the first test to identify organisms that cause bloodstream infections and provide information on the correct antibiotics for treatment. De novo is a way to get products on the market without going through the Food and Drug Administration’s most stringent review process, known as premarket approval.

However, if companies have to pay a new fee that is seen as relatively burdensome, it could dissuade applicants from seeking de novo classification, though not all sources contacted by Bloomberg BNA see this as a major concern.

There’s no current user fee on de novo, but that’s expected to change by the start of the next fiscal year in Oct. 1.

De novo is designed to accommodate novel devices that aren’t like a “predicate” device on the market. Most devices reach the U.S. market by a premarket notification or 510(k) submission, based on a predicate already on the market. As the FDA website notes, once a device gets a lower or moderate risk classification under de novo, it can be used as a predicate for someone else’s 510(k).

A de novo submission is a premarket request for the FDA to classify a novel device into class I (lowest risk) or class II (moderate risk). Receiving the class I or class II classifications means the devices aren’t subject to the most stringent FDA review process, premarket approval (PMA), which is for the highest-risk category, class III. A PMA must contain sufficient valid scientific evidence to assure that the device is safe and effective for its intended use.

Because the new user fee comes with an FDA commitment to speed up review times, it could make the pathway more attractive. But the National Center for Health Research, a Washington-based nonprofit, said it’s concerned that the de novo pathway could cause safety issues since it doesn’t require the same scientific evidence as a PMA. 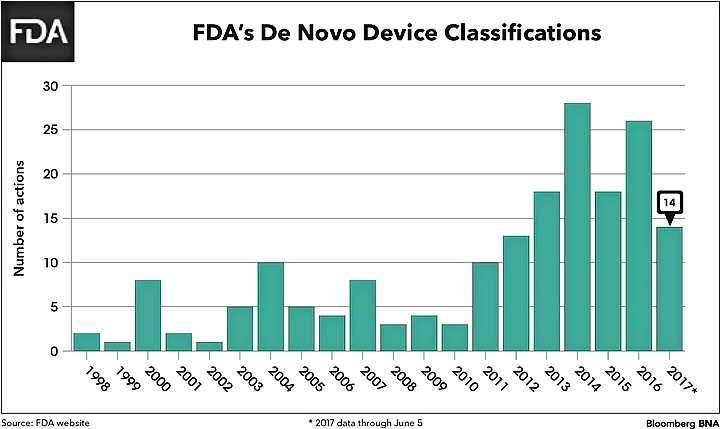 The de novo pathway was created in 1997, but the pathway was modified by the Food and Drug Administration Safety and Innovation Act of 2012 (FDASIA). Prior to FDASIA, before manufacturers could submit a de novo, they first had to submit a premarket notification or 510(k), to get an FDA determination on whether the device was not substantially equivalent (NSE) to any legally marketed predicate devices.

Under FDASIA, sponsors can submit de novos without a preceding 510(k), and the use of de novos has increased since 2012. […]

Diana Zuckerman, president of the National Center for Health Research, a Washington-based nonprofit, told Bloomberg BNA in a June 5 email her group is concerned about possible safety issues with the de novo pathway.

“We are concerned about de novo because we do not know what evidence the FDA is requiring, we only know they are not usually requiring clinical trials. We think that all de novo devices should be required to be proven safe and effective based on scientific evidence,” Zuckerman said.